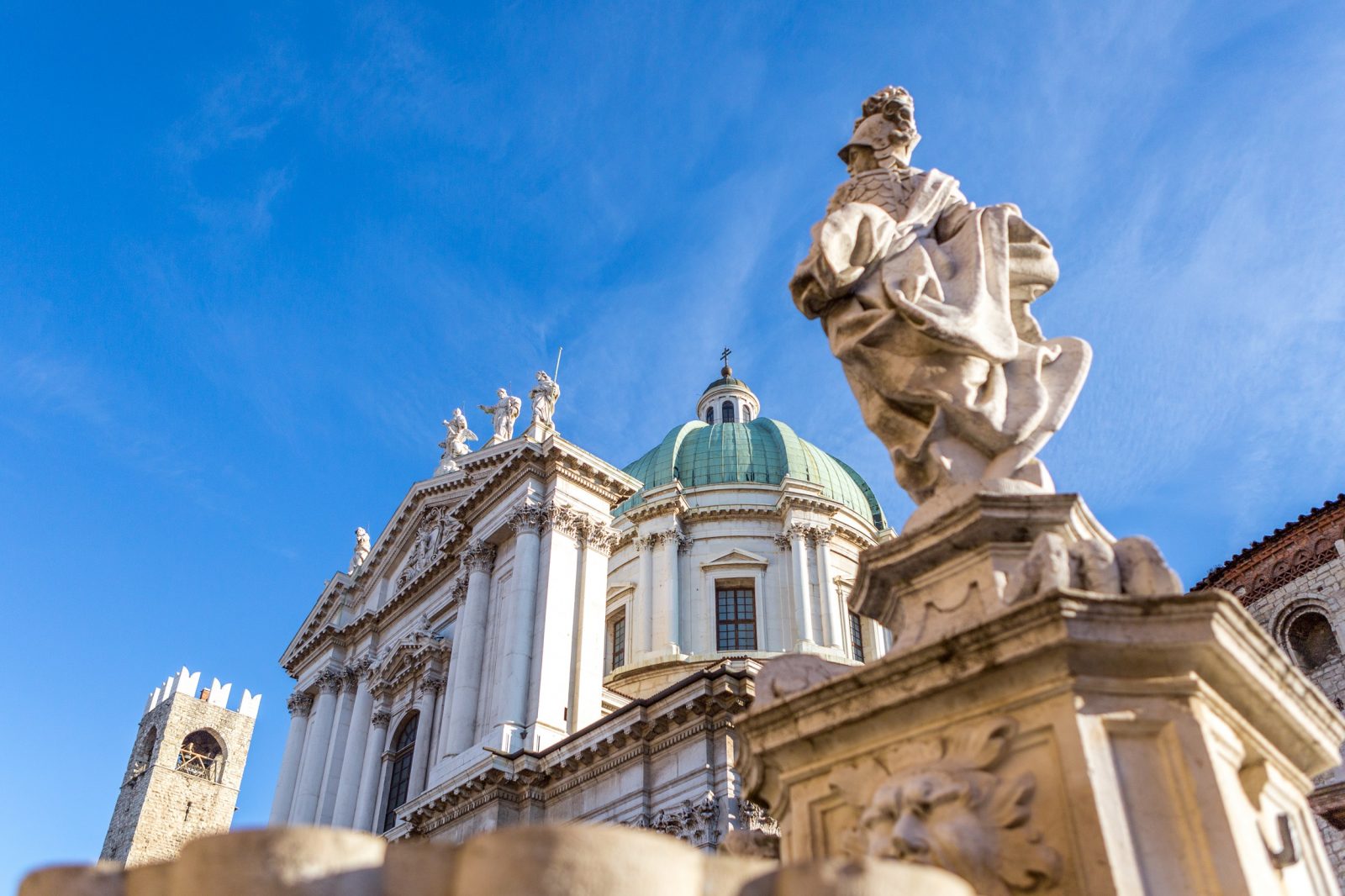 A city rich in culture, history, and art which is gaining more and more centre stage in the international tourism landscape. Come with us and learn about 12 things to see in Brescia, from points of interest famous all over the world to hidden gems worthy of a visit during your stay.
Let’s start our journey!

An exceptionally relevant site from the historic and artistic perspectives, today the complex of Santa Giulia is the city’s main museum and a true treasure trove. From 9th-century Desiderius Cross, one of the most grandiose jewellery works in the world, to the incredible frescoes of Coro delle Monache. From the remains of the old Roman villas to the beautiful interiors of San Salvatore basilica. It is no surprise that Santa Giulia is one of the most visited attractions in Brescia. Together with the Capitolium Temple archaeological area and the Monastery of San Salvatore, the museum is part of the UNESCO site in the heart of ancient Brixia. It is also the venue of important temporary exhibitions.

In 2011, the Roman archaeological area in Brescia was listed as a World Heritage Site. The UNESCO site includes the archaeological area of Piazza del Foro square, Capitolium temple, the Republican sanctuary, the ancient theatre, the Roman Basilica, and the monumental complex of San Salvatore – Santa Giulia. The area is completely accessible also with augmented reality. Learn more about the archaeological area and Piazza del Foro.

Brescia’s Castle, a large fortification built on Cidneo hill between the 14th and 16th centuries in a strategic position and dominating the whole city, is particularly dear to Brescians.

It’s a sought-after destination for relaxing walks surrounded by green areas and stunning views. The castle contains the oldest Italian public astronomic observatory, a beautiful model train display, and Luigi Marzoli Arms Museum. Many events are organised throughout the year: a historic re-enactment, craft markets, and outdoor cinema. A not-to-miss experience is the visit to the dungeons with Associazione Speleologica Bresciana.

The castle is conveniently served by a parking lot and can be easily reached on foot with a 15-minute walk from Brescia’s old centre.

The most prestigious Brescian library owes its name to Cardinal Querini, who founded it in 1747 in the Bishop’s Palace in Via Mazzini – which is still its current location. Since then, Queriniana Library has continued to enrich its collection which today boasts as many as 500,000 volumes including 1,158 incunables, 8,386 cinquecentine (books printed in the 16th century), and 10,000 manuscripts with magnificent examples of illuminated codes. Severely damaged during World War II, the building was subsequently repaired and modified to adjust to a more modern concept of library layout. Intense preservation efforts were made to maintain the building’s original solemn appearance. Today, Queriniana Library is still the point of reference for Brescia’s culture and beyond.

Also known as Piazza Duomo, this square contains the buildings that were the symbols of the town’s civic and religious power in the Middle Ages. These are Broletto, seat of the Prefecture and some municipal offices, with its historic Torre del Pégol tower and Duomo Vecchio (Old Cathedral), a rare example of Romanesque architecture with circular layout and splendid works by Romanino, Moretto, and Cossali. In the middle of the square stands Duomo Nuovo, built starting from 1604 and completed in 1825 by Vantini. The square is dotted with nightlife spots and during the year it hosts several cultural initiatives. It is also a very popular area for those who love strolling in the old centre.

Characterised by a splendid combination of different styles but with a clear Venetian influence, Piazza Loggia is one of Brescia’s beating hearts. West of the square is imposing Palazzo Loggia, built between 1492 and 1570 with impulses from Palladio and Sansovino. Today, it is the seat of the municipal government. On the east side, Torre dell’Orologio tower with the old astronomical clock marks the start of the elegant porches, the core of the city’s shopping area. One noteworthy element on the south side (toward Piazza Vittoria) is the façade of Monte di Pietà pawnshop, displaying portions of Roman gravestones. Piazza Loggia is a highly sought-after venue for summer concerts featuring the most acclaimed international artists.

Characterised by old alleys and stunning corners, Carmine district just off Piazza Loggia is one of the preferred night life spots for city youth. Served by San Faustino light rail stop, the district is dotted with beautiful churches, historic buildings, osterias, and small bars for an after dinner drink. During the day, the district is very popular among university students. Built in the 13th century in an evocative intersection of old alleys, the church dedicated to St. Francis of Assisi. It has a Late Romanesque exterior with a large central rose window. The three naves are richly decorated with frescoes and the side altars display noteworthy works by Moretto and Romanino. The “Madonnina” Cloister is worth a visit, as well as the main cloister with Verona red marble columns. The side door on the right of the façade is the entrance to the famous mechanical nativity scene created by the Franciscan monks and open during the Christmas holidays.

Learn more about San Francesco and other churches in Brescia.

The third large square in Brescia together with Piazza Loggia and Piazza Paolo VI is Piazza Vittoria. Its vastness creates an ideal space for a walk under the sky in the heart of the city. It’s characterised by the austere, imposing architectural lines of the Fascist era. Noteworthy buildings overlooking the square are the Post Office and on the right side one of the first skyscrapers in Italy. On the east and west sides, there are two colonnades with commercial activities which create a harmonious symmetric effect. Animated by events and food markets, Piazza Vittoria has a large underground parking lot and is served by the namesake light rail stop.

Built in 1810 to replace Accademia degli Erranti, Teatro Grande is considered one of the most important theatres in Italy. The Neoclassical theatre has five levels of boxes and frescoed galleries enriched by stuccoes and gilded elements. The magnificence of the main hall is rivalled by the splendid Ridotto (foyer)’s elaborate frescoes, gilded stuccoes, and mirrors. It is one of the finest examples of Rococo in Brescia. During the summer, the theatre organises guided tours of the building. It is a not-to-miss opportunity to learn about the secrets of this place of culture and visit the stage and back of the stage. For information on this Grand Tour, visit the official website.

This luxurious mansion designed by Rodolfo Vantini was commissioned by the Tosios, who moved their extensive art collection here and created a true private library and art gallery. The collection includes sculptures, objects, and paintings by artists as renowned as Raphael and Lotto. It was deeded to the city upon the couple’s death. Since 1908, it has been the seat of Ateneo di Brescia. Today, Palazzo Tosio is also a house – museum and can be visited upon reservation. Raphael, Foppa, Savoldo, Moretto, Romanino, Lotto, Ceruti, Hayez, Canova. These are only some of the artists whose works enrich Pinacoteca Tosio Martinengo, Brescia’s art gallery. The collection ranges from Late Gothic to early 19th century and includes paintings, sculptures, jewellery, enamelled objects, medals, and a large space dedicated to the most important Brescian Renaissance painters. Pinacoteca Tosio Martinengo is considered one of the most noteworthy art galleries in northern Italy. The visit includes 21 rooms with dramatic décor. Cultural itineraries in the province of Brescia