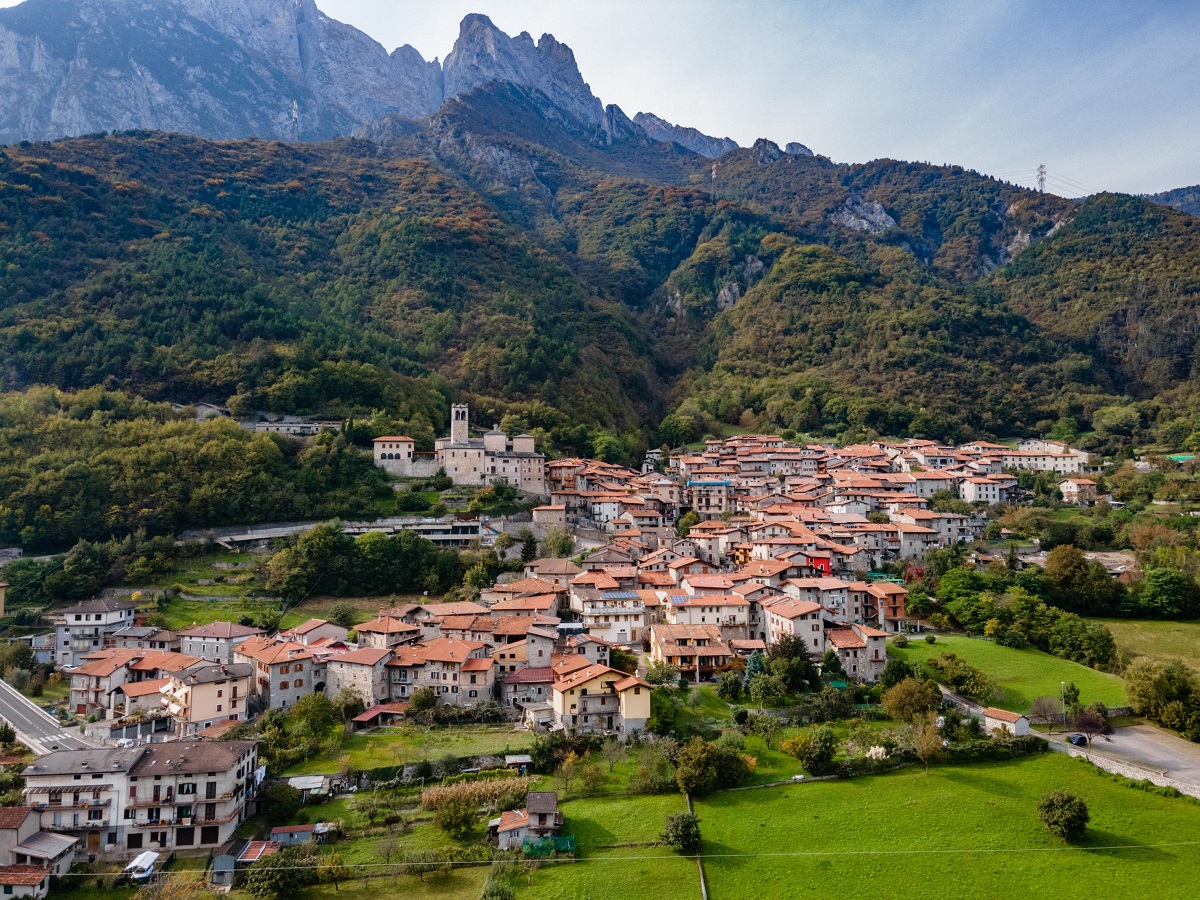 Known for its immense display of rock engravings (a UNESCO site), Camonica Valley is a place where the beauty of the landscape, art, and spirituality have been intertwined with the history of civilisation since the beginning. Archaeological sites. Small hidden gems. Learn about the points of interest that you can’t miss during your stay in Camonica Valley. The “Valley of Signs” is ready to stun you!

A national monument, Oratorio dei Morti is located in Montecchio di Darfo Boario Terme by the picturesque bridge over Oglio River. Built at the end of the 14th century, it was extensively modified over the centuries and at one point in time was even used as a leper hospital. The 1962 restoration brought to light the original frescoes, thus giving back to the community one of the most important pictorial cycles of the 15th century with Christ Pantocrator surrounded by the Apostles, Evangelists, Deacons, Popes, and Fathers of the Church. The southern wall displays a Crucifixion attributed to Pietro da Cemmo’s school. Learn more about the Church of the Oratory or the Dead.

Surrounded by nature, the Convent and Shrine of Annunciata is a very significant spiritual and cultural site in Camonica Valley. In addition to the Late Lombard Gothic style church with frescoes by Pietro da Cemmo and the altarpiece attributed to Palma the Young, you can’t miss visiting Sepolcreti, the cloister of Sant’Antonio and the cell – museum of the Beatified priest Innocenzo da Berzo. The complex also hosts a permanent nativity scene. Outside, you can take a regenerating walk and enjoy the view of Camonica Valley from the terrace. Located in a dominating position in Esine’s historic centre, the nave and presbytery are decorated with magnificent frescoes painted by Pietro da Cemmo. This artistic gem also contains a 3 metre-high Christ Pantocrator surrounded by the Saints and a grandiose Crucifixion. This peaceful oasis is also recognised as national monument. One of the most visited towns in mid-Camonica Valley is Bienno. Its well preserved picturesque alleys, crenellated towers, old mansions with loggias and stone entrances, and the watermill fully reveal the medieval origin of Bienno’s old centre. The old forges are worth a visit; still today, you can experience the old iron-making tradition thanks to perfectly functioning original 17th century hammers. Bienno is one of the “Most Beautiful Small Towns in Italy” and every summer hosts the famous Mostra Mercato (Exhibition Market).

The village of Civitate Camuno boasts one of the most important and best preserved Roman sites in Camonica Valley. The site includes the remains of the theatre, amphitheatre, and spas and today has become a 20,000 sqm Archaeological Park. The visit continues with the adjacent Camonica Valley National Archaeological Museum in Piazzale Giacomelli with a collection of Roman statues and artifacts found in Cividate Camuno and the surrounding area. The museum is organised in four sections: land, necropolis, Roman city, and the room dedicated to the gods and the heroes, among which the Minerva statue found at the Minerva Shrine in Breno.

Today, what is visible of this Roman temple are the foundations, traces of the painting work, a mosaic, and a copy of the statue of the goddess Minerva (the original is at the Camonica Valley National Archaeological Museum in Cividate Camuno). It was built on the foundations of a prior temple dedicated to Minerva which was absorbed into the new construction during the “romanisation” of Camonica Valley. Located between Oglio River and the rock of S. Stefano in the hamlet of Spinera di Breno, the site can be easily reached through the walk and bike path.

A not-to-miss stop on the artistic route “Romanino in Camonica Valley”, this church (deconsecrated at the end of the 19th century) has become a national monument in 1910. After entering by the stunning Renaissance door, the interior showcases frescoes by Pietro da Cemmo (late 15th century), the large altarpiece by Callisto Piazza (1527), and the cycle dedicated to St. Daniel the Prophet’s made by Gerolamo Romanino (1536-37).

An interesting fact about the church is that before becoming a monument, the building was used to shelter military troops passing by the region and was even used as a cinema. In a building by the Cerveno parish church are the 14 Via Crucis (or Santa Crus) chapels, one of the most significant examples of local art and faith in the whole Alpine Arc. This invaluable work every year attracts thousands of pilgrims who come to admire the 198 full-size wooden and plaster statues carved in mid-18th century by Beniamino Simoni and his emotional interpretation of the Passion of Christ. Careful restoration work has been under way for a few years to restore the most deteriorated chapels. Learn more about Via Crucis Shrine.

Naquane Rock Engraving National Park was created in 1955 and was the first archeological park in Italy. It includes as many as 104 engraved rocks with images that have become the symbols of rock art in Camonica Valley. These engravings were made between the Neolithic (5th-4th millenium b.C.) and the Iron Age (1st millenium b.C.) One of the most famous rocks is Rock no. 1 with its incredible display of about 1,000 engraved figures.

The park covers over 14 hectares of wonderful forest and is divided into 5 itineraries with information signs along the way. The site is one of the eight parks listed as UNESCO Heritage Site no. 94, “Rock Art in Camonica Valley”. Hosted in Villa Agostani (16th century), a bishop seminary in the old centre of Capo di Ponte, the museum gathers remarkable testimonies of the civilisations that inhabited Camonica Valley during Prehistory and Protohistory. There are steles, ceramic artifacts, grave goods, domestic objects, and other items found during archeological excavations in the area. This is a must-see for those who want to better understand the immense heritage of the rock engravings. True gems of Romanesque style in Camonica Valley (11th and 12th centuries), the Romanesque church of San Siro is built directly on the rock perched over the river and has a magnificent door, 15th-16th century frescoes, and a crypt.

The only remaining portion of a larger complex, the Church of San Salvatore Monastery is a unique testimony of the presence of Cluniac monks in Camonica Valley. It’s characterised by an octagonal lantern and is surrounded by vegetation. Inside, it has an officinal garden with precious medicinal plants used as early as the Middle Ages.

Learn more about the Romanesque churches of San Siro and San Salvatore.

A small gem in the historic centre of Edolo, this church contains beautiful wooden statues and a marvellous fresco cycle attributed to Paolo da Cailina the Young about the life and history of St. John the Baptist. It is considered one of the most important 16th century painting cycles in the province of Brescia. 13) Museum of the White War in Adamello (Temù)

Created in 1974 through the dedication of a group of friends, the museum displays artifacts, objects, and documents from World War I – which was called Guerra Bianca (White War) in Camonica Valley’s mountains because it was fought on the snow covering the Adamello mountain range. The museum is a renowned and appreciated research and cultural hub: it has a room for temporary exhibits, a conference room, an educational room, and a library-archive dedicated to the Great War. 14) Church of the Most Holy Trinity (Ponte di Legno)

Built on a terrace in the historic centre of Ponte di Legno, Santissima Trinità church can be accessed through two staircases that end with an elegant balcony offering a lovely view of the town. Visitors are welcomed by the façade decorated with large frescoes of Saints and the Most Holy Trinity over the door. Inside are works by Giovan Battista Ramus and sculptor Ettore Calvelli. 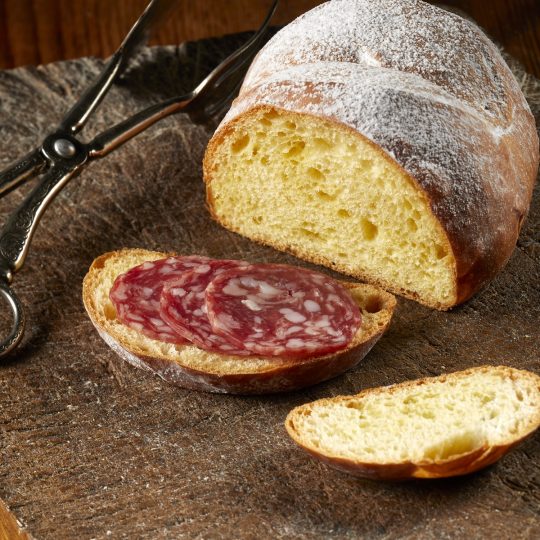 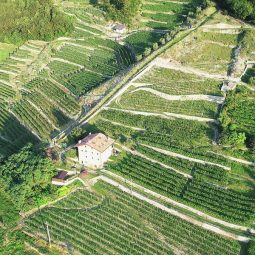 Bold wines on the slopes of Camonica Valley